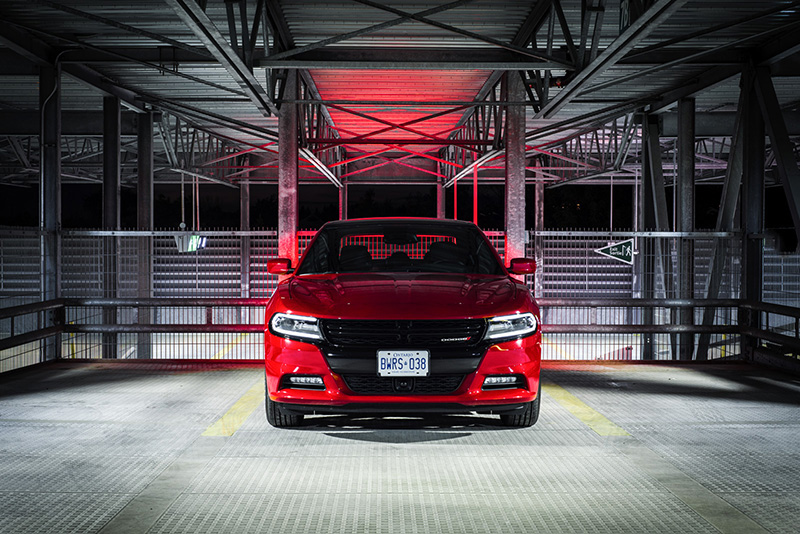 The glistening spotlight is on the 707-horsepower Hellcat twins but people might forget that the Dodge Charger is offered in more sensible flavours down the price ladder. Nine of them in fact. There are four engines to choose from, one V6 and three V8s, a new 8-speed TorqueFlite automatic transmission, and the option of AWD exclusive to the V6. And you would've never guessed that all this is built and assembled in our own backyard of Brampton, Ontario.

Dodge labels the Charger as a four-door muscle car so I curiously brainstormed on other vehicles I could compare it to. Pontiac G8? Extinct. Chrysler 300? The older cousin. Ford Taurus SHO? Reminds me of a cop car. Chevrolet SS? Not in Canada, buddy. Cadillac CTS-V? Well, the new one isn't out yet. Email me if you think of more but it's fair enough to say that the market competition is fairly limited. And who wouldn't more of these hairy-chested family haulers anyways?

For me, the engine is what really defines a muscle car. Looks are second. Fire-breathing V8s are the preferred choice but we're here to look at the more prudent V6 engine for the fuel-conscious customers. Our tester came equipped with the base-spec 3.6-litre Pentastar V6 that delivers an output of 292 hp and 260 lb-ft of torque. However, the optional Rallye (WALL-E?) package ($495) we had equipped uses a unique cold-air induction system, a sport-tuned exhaust and an engine calibration to vamp up the figures to 300 hp and 264 lb-ft, a slight increase of 8 and 4, respectively. A single digit difference is hardly going to be noticeable but just because it doesn't have eight cylinders does not make it slow. The V6 is quite powerful and offers a lot of punch once you travel up the RPM range. It doesn't struggle getting up to speed and it works well in conjunction with the new 8-speed TorqueFlite transmission to provide direct and fluid gearshifts.

Speaking truthfully, the six-banger is uninspiring to say the least. We tested the 2015 Chrysler 200C a few weeks ago that used the same V6 engine, but that exhaust was exhilarating and sounded real mean - even conjuring up comparison with the Maserati Ghibli's exhaust note. On the other hand, the Charger's noise output is on the hush-hush side of the musical sheet, making us drool and dream of two more cylinders every time we mash the throttle. Looking on the bright side you'll certainly get the fuel economy to match, and V6 advocates will know that. They would be more than happy to sacrifice noise and horsepower numbers for lower dollar signs at the pump.

In this case, our V6 tester averaged 13.0 L/100km - hardly economical but we barely drove it on the highways and were mostly sandwiched in stop-and-go traffic. Dodge's official fuel numbers are 12.8 L/100km in the city and 8.6 L/100km on the highway but the smart consumer knows that these V6 engines only need 87-octane fuel. Dodge's V8 engines require 89-octane and up. The added gears in the new 8-speed transmission aids the cause as well, resulting in one of the best highway fuel consumption in its class.

The Charger's V6 engine also comes with the exclusive option of All-Wheel Drive ($2,200) aka. the anti-burnout feature that we Canadians love but don't necessarily need. I see no problem slapping on some winter tires and using careful throttle management when the snow hits the ground. It'll save some weight and marginally help at the fuel stations as well.

The Charger is a big car and it feels like one behind the wheel too. The front hood is enormous and the steering wheel is huge and hefty. Luckily, outward visibility is good and the myriad of safety tech keeps our blindspots and rear view in check. One of the downsides to the Charger however, is that the electric steering feels fairly numb and void of feedback. It's not always a bad thing for a car with these colossal dimensions but it does manage to zap out any sportiness from the drive. Sport mode doesn't do much to remedy it either, it holds the revs longer and slightly oh-so slightly tightens up the steering. The ride and suspension are top-notch though. I haven't been in a sedan this comfortable in quite some time. Your family won't be complaining but it's not going to "wow" them either - that honour is reserved for V8 graduates.

Every body panel except the rear doors and roof have been resculpted and restyled for 2015. The new design pays homage to the Chargers of the past and the looks are unmistakably American. It looks mean, real mean. To some people's dismay, the front fascia has borrowed much inspiration from the Dart, making it look slightly less special and ominous. But the Rallye package ($495) we have on our tester adds some black front panels to make it look like the more expensive R/T models and a rear body-coloured spoiler for a more aggressive demeanor to match up with it's steroidal muscle-car image.

The Charger looks even better when you opt for the R/T Scat Pack, SRT, or Hellcat trims - the front grill is morphed into a cleaner and more sinister-looking design. The rear fascia on the other hand doesn't look like it's changed much from the previous generation and it still sports that "racetrack" LED taillamp that reminds me of the Lincoln MKC. This particular Redline Tri-Coat Pearl paint also seems to blend in with your polar bear's Coca-Cola bottles.

As expected from a full-size sedan, the interior is cavernous and littered with storage compartments. The front seats are massive and tall people won't have any problems getting in or out. There's no sunroof (an option for $1,395) either so the amount of headroom is more than enough. I stand 6'1 with a slender figure but I still feel like a dwarf sitting in this car - the seat bolsters are so wide that I strenuously slide every time I take a hard corner.

I like what they've done with the two-tone black and red cabin design. It's eye catching and manages to express upscale qualities without looking garish. The new three-spoke steering wheel is a nice touch too and like every other FCA product it gets those "puppet" paddle shifters mounted behind and above the audio controls. The media interface is one of the easiest and most responsive ones on the market, kudos to FCA for that. Volume knobs are also present but there's still a lack of heated seat/wheel hard buttons - that's just a personal preference. Overall, it's a well-appointed interior. Easter eggs are scoured throughout the Charger's interior too including the hammer-style gear shifter, which is a welcome throwback to the older Charger's T-shaped knobs, and a "Dodge Brothers" reference on the center-console storage mat.

Our Dodge Charger SXT Rallye AWD sits on the sensible end of the MSRP spectrum, starting at $37,995 and ringing out at $45,480. That's almost $7,000 in options but for a full-size four-door muscle car with such characterful styling and every gadget and gizmo in the book, it's almost a steal. How would I spec it? Even though I live in Canada I would do without the AWD ($2,200) and save that money for the Rallye Appearance Package ($495) and the Black Painted Roof ($1,395) - these upgraded looks will confuse most people into thinking it's a Hellcat. I would also do without the Premium Group Package ($5,295) as the list of standard options prove to be more than I need - heated front seats, automatic air conditioning, and a remote start system just to name a few.

In spite of the decent fuel economy, the V6 is hard compromise. To the sensible and frugal buyer that desire good looks and family-hauling usability, the SXT is a no-brainer choice. It'll be the angel on your shoulder praising your decision every time you're at the pump. But I'll be honest with you, the entire time I've been writing this review my mind has been fixated on a moment last week when a V8-equipped Charger overtook me on the highway. He was driving like a jerk full throttle and weaving in and out of traffic but I must admit, the noise from that engine tug at my heart strings. You'd only have to fork over an extra $3,900 to go from an SXT to the V8-equipped R/T too. Just give up the premium options, the sunroof, the AWD, and before you know it you've got yourself enough cash in your budget for a new set of winter tires, a 5.7-litre HEMI V8 engine, and be able to pay off the fuel difference for more than two years. Hallelujah.