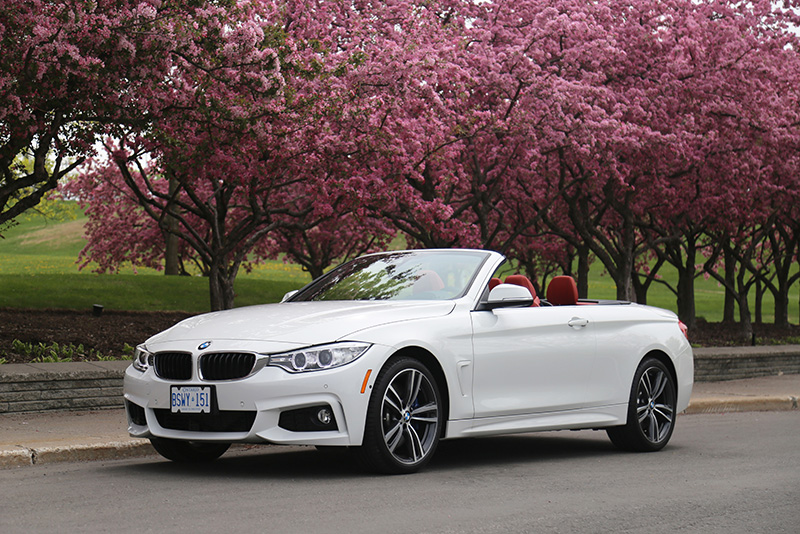 It's allergy season and what better way to celebrate its arrival than to get those immune responses overflowing with a face full of pollen at 80 km/h. This is the topless 2015 BMW 435i. They call it the cabriolet; I call it the best-looking convertible under $80,000. The 4-series is nothing new, we've all seen it on the streets before. And we've finally gotten used to the whole BMW naming fiasco where sedans are designated with odd numbers and coupes with even numbers.

So what's the big deal with the convertible version? Bad news first: it's 234 kg heavier than its coupe equivalent. That's sure to take a blow to the driving dynamics and handling. The starting price of the convertible is also a whopping $13,500 more than the coupe. You can get a Nissan Micra for that kind of money, with PDI and delivery too. And the consequences of a folding metal hardtop compromise the car's rigidity and also the amount of storage room in the trunk. Oh, and you can't get a manual with the cabriolet. Only an automatic.

The good news is that chopping the roof off the coupe made the 4-series feel so much more special. Personally I think it looks better than the coupe. It's sleeker, more elegant, and wouldn't you rather choose an open sky over a dinky little sunroof. We popped some Reactine, drowned our eyes in Patanol, sniffed up some Nasonex and took this seductive Bimmer to say hello to some countryside flower sperm.

Top up or down, the 435i Cabriolet is a handsome looking car - something that can't be said about every convertible. The missing B-pillars might cause some worry in the racing department, but the way the front and rear windows can open for a seamless oval cavity is short of breathtaking. It reminds me of the Mercedes-Benz coupes like the E350 and CL550. The LEDs look spectacular at night and they finally got rid of those tacky M badges on the side fenders.

But the keyword here is hardtop. I've heard way too many horror stories about soft-top convertible owners having their beloved vandalized with knives and scissors cutting into the fabric. They're also not as effective in isolating the interior from the winter cold. Hardtops are also fairly limited on the market: BMW Z4, Mercedes-Benz SLK, SL, Lexus ISC, Miata, you can even count the Jeep Wrangler as one. It's quite a short list, but it's key to using your convertible during all four seasons. Who really wants to drive their fabric soft-top during a cold winter storm? The BMW's retractable roof does take quite a few seconds to open and close but you'll be happy to hear that you can operate it when cruising under 18 km/h. None of that full-stop-only nonsense.

If you were to ask me, "what's the best part about the 435i Cabriolet?" I'd tell you how good it is at deflecting wind in the cabin. It's quite the perfect cruiser even in single digit weather (Degrees Celsius of course). The foldable pop-up wind deflector easily attaches above the rear seats and works incredibly well to create a draft-free cabin. With the windows up, the 435i just feels like it has one rather large sunroof. And the star of it all is the Air Collar option that comes with the Executive Package ($2,800). It's similar (or copied straight from the BMW thesaurus) to Mercedes-Benz's Air Scarf - there are fans on the headrest that will blow hot air around the driver's and passenger's neck to warm them up. Combine that with heated seats and a heated steering wheel, and not even a speck of snow will stop you from pulling that roof down.

The great thing about that Air Collar option is that you can use it even if the roof is up. If you're hopping into a cold car in the winter, turn it on and your neck will feel toasty on your frigid commute home. The fans are a bit loud when the car is idling but once you factor in the road noise and turn up the Harmon Kardon speakers, you won't hear a thing.

BMW Canada really likes their cars in white. Matched with the red and black interior, it's one of our favourite colour combinations and what we like to call the Markham Special. The interior is Plain Jane BMW, failing to deviate from the design of the 3-series and pretty much the entire BMW lineup. Now it might sound ridiculous but I never liked how BMW's cupholders could never hold my rectangular wallet properly. It's like playing Tetris and trying to fit a square block into a space where only an L-block would fit. It just doesn't work.

From the driver's seat it's easy to forget there's a useful pair of seats behind you. To our surprise, you can comfortably seat two adults back there. There is quite a lot of legroom and while the coupe variant was plagued with diminishing rear headroom, the convertible offers a drop-top remedy. The substantial downside to the convertible is the storage space, or lack of it. The retractable roof will take up most of the available cargo room so don't expect to put a lot back there. Weekend road trips for two is recommended, but if you decide to invite two other buddies, tell them to pack light.

The 435i Cabriolet receives one of the smoothest turbocharged inline-six engines I've ever driven. The output is rated at an even 300 horsepower and 300 lb-ft. of torque. You'll feel a heavy wallop in the low rev range and the power runs quite linearly up to 6500 rpm. The exhaust has a fair bit of grunt to it and gives off a deep and baritone brap-brap-brap rather than the sonorous roar from a neighbouring AMG. The now ubiquitous 8-speed automatic transmission goes without saying, it's perfection. The shifts are creamy and last minute downshifts won't lurch the car forward.

Launch control is also incredibly easy to operate. Foot hard down on the brake (and I mean hard, this is why it doesn't work for a lot of people), shift your car into Sport Plus, knock your shifter left into Sport, slam down the gas pedal, let the revs build up until you see a checkered flag, then release the brake. Off you go with as little wheel spin as possible. It's not GTR-quick but it's certainly fast enough to make your passengers regurgitate up their sushi lunch.

Some colleagues warned me about the numb driving feel that they have experienced with the 4-series Cabriolet, but I didn't get that with our tester. That's probably because ours has been fitted with the M Performance Package ($1,900). I've had many readers ask me if this package is worth it and the answer is yes. It includes 19-inch M double spoke wheels, bigger M sport brakes, an Adaptive M Suspension that monitors the road for optimal traction, and Variable Sport Steering that decreases how much you have to turn your wheel to achieve the same turning radius. That last feature is really what makes it. The steering feel is shorter, more direct, well weighted and doesn't feel as loose as what my colleagues have mentioned. For those seeking more, there's also an M Performance Package II ($2,500) that will squeeze out more horsepower and torque from the six-cylinder and also add on a performance exhaust that serves to heighten your aural experience.

Of course, with a drop-top convertible, you'd expect the lack of a B-pillar to affect the vehicle's rigidity and handling. In this case, it's never been more true. The suspension feels too stiff for a luxury cruiser and the 435i performs with less confidence and poise in the corners. It's friskier than the coupe but overall it still handles better than the competition. Remember that saying? "Mercedes-Benz's are meant to be ridden in, and BMWs were meant to be driven." One of my close friends recently picked up a new 2015 Mercedes-Benz C400 4MATIC and offered to swap with my 435i for a few hours. Within the first few minutes I could feel myself cringing as I struggled to warm up to the C400's numb steering feel. It felt vague and void of feedback, and the exhaust was also less appetizing than the BMW. I rolled down the window and yelled, "can we switch back please?" Don't get me wrong, the Merc was a delightful sedan. It was calm and serene but the BMW was so much more stimulating.

The BMW 435i xDrive Cabriolet starts at base price of $69,100 - since when was it ever going to be cheap? With all the bells and whistles, our tester rings up just below $80,000. But what other convertible can you really get under eighty grand that is this appealing and fun to drive. Plus, the extremely effective air collar and wind deflector offer a much-needed remedy for all four Canadian seasons. There's no need to garage it away, not for anybody, including Mother Nature. And for that alone it's a winner in my books.